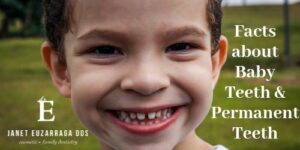 When we think of losing a tooth, what is usually the first thing that comes to mind? The tooth fairy, right?! After all, a visit from the tooth fairy is a childhood rite of passage! But what really happens, and what should parents expect, when baby’s primary teeth first erupt, gradually fall out, and the child’s permanent teeth come in? Learn more about this fascinating process from Dr. E, below:

The wails and shrieks that exhausted parents of infants endure are usually associated with the process known as teething. Around six months of age, the primary (or baby) teeth begin to erupt through baby’s sensitive gums. First come the bottom central teeth followed by the top four front teeth. The rest of the primary teeth gradually fill in (usually in pairs) throughout early toddlerhood. Most parents will find that their child has all of their primary teeth by about 2-3 years of age. That is why dentists also recommend that you bring your child in for their first dental visit around this age so that they can help you ensure that tooth development and oral health are on track!

As the jaw grows, more space is created between the baby teeth in order to make room for the arrival of permanent teeth. Children’s permanent teeth erupt at varying rates due to heredity and other factors. However, at around 6 or 7 years old, children typically start to bid their baby teeth farewell while visits from the tooth fairy commence! While the timing varies from child to child, the central incisors and first molars usually erupt at around 6 – 8 years of age, followed by the lateral incisors, canine teeth, premolars, and second molars. The third molars, aka wisdom teeth, may arrive during the late teen years, or they may not even erupt at all.  However, that’s OK – they are so far back in the mouth that they are typically NOT needed for chewing and they are very hard to effectively brush.

Now that you understand the timeline of tooth development – from teething all the way through to the teen years — we’ll leave you with some final fascinating facts about the development of baby teeth and permanent teeth:

Is your family’s oral health on track, contact Dr. E Cosmetic and Family Dentistry today to schedule an appointment! 480-494-2435

Five Common Questions About Your Teeth (and the Answers!)How Your Smile Affects Your Health

A Glimpse at Dental Care Around the World

Top 6 Foods That Whiten and Brighten Your Teeth

What Does Your Dentist Love?

Is Tooth Decay a World Crisis?

Our Best of Ahwatukee Dentist

Great Holiday Gift Ideas for the Dentist on Your List

Aging and Your Teeth

Recovery from a Dental Procedure

Why do I have a toothache?

Q&A with Dr. E: Is Teeth Bonding Right For You?

If you have had a great experience with Dr. E and her staff, tell your friends and family.

You’ll receive a gift card (choose from many great locations) for every patient that is referred by you. No limit!