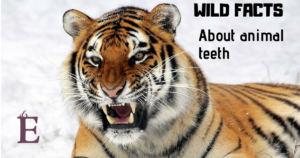 We usually bring you important news and tips about your teeth. BUT, we thought it would be fun to show that all teeth are not created equal. Especially when it comes to animals! Here are some interesting (and pretty wild!) facts about animal teeth.

Horses have 44 chompers, dolphins can have as many as 250 teeth and, it’s hard to believe, but snails can have more than 20,000 tiny, very sharp teeth — located on their tongues!

We may only get one natural set of teeth during our lifetime, but this is not the case for sharks. They shed and regrow their teeth. While it varies by species, many sharks average around 30,000 teeth throughout their lifespan!

3) The Blue Whale has no teeth.

The largest mammal in the world  — the blue whale – has absolutely NO teeth. (They only eat shrimp and other tiny sea creatures).

Similar to human babies, dogs also lose their baby teeth. Taking proper care of your canine’s teeth can add 2-5 years to their lifespan!

Unlike dogs (and humans!) cats can’t chew up their food. That’s because their molars aren’t flat. Instead, they swallow their bite-sized food whole.

6) An elephant tusk is actually a type of tooth!

But, you guessed it, elephants primarily use them for defense against predators rather than chewing and eating.

7) A grizzly bear’s teeth are surprisingly short – only a few inches.

However, they have the strongest bite in the animal kingdom! That’s because their jaws are so strong that they can immediately crush whatever they bite with deadly force.

When a tiger opens and closes its jaws, its canine teeth function like razor sharp scissors, slicing through the creature’s unfortunate prey.

9) Cows eat with their lips.

Cows and other herbivores have no need for incisors because they cut up the plants they eat with their lips.

Many animals “floss.” But not the same way as humans. Instead, they chew on bones or sticks to naturally scrape away food particles caught between their teeth.

We hope you’ve enjoyed these wild facts about animal teeth, giving you a new perspective on how teeth are designed to serve a purpose!

Protect Your Teeth: Take Care of Your Toothbrush!

Dental Tips to Help You Survive the Holiday Season

Should I Get a Second Dental Opinion

The Benefits of Smiling

Self Care Awareness and Oral Health

How Often Do I Need Dental X-Rays?

Mouth Breathing vs. Nose Breathing and the Dental Impacts

How to Protect Tooth Enamel

If you have had a great experience with Dr. E and her staff, tell your friends and family.

You’ll receive a gift card (choose from many great locations) for every patient that is referred by you. No limit!